Stacie Ponder over at the lovely Final Girl blog has a fun little blog-a-thon film club she runs every month. All you've got to do it watch the film she picks, post your review of it, and link back to her. I already participated last year by adding my review of the bad zombie flick Burial Ground: The Nights of Terror to the list. It was sort of a cop-out though, because it was a previously existing review, and not specifically written for the Film Club. This month's selection is the rather infamous City of the Living Dead, directed by the much-loved Lucio Fulci, one of the most well-known Italian horror directors of the 20th century. Strange: of the two times I've made a submission for the Film Club, both have been bad Italian zombie films, and both have been films I've already posted reviews on. But this time around I decided to re-watch and then do a full length review of the film, as my original review was just a brief capsule review. Also, my opinion has changed a bit since the first time I watched it.

In a cemetery in Dunwich, New England, a priest calmly hangs himself. The event has two effects. First, a New York psychic called Mary Woodhouse (Catriona MacColl) apparently dies from the supernatural ripples this event causes throughout the world. Secondly the priest's suicide has opened one of the seven the gates to hell, with the rest soon to follow. Mary isn't dead, however, but in a strange catatonic state. Buried alive she is rescued from her grim fate by investigative reporter Peter Bell (Christopher George), who happened to be snooping around the graveyard in order to hopefully shine some light on her strange "death" (he was going to do an interview with Mary before the news of her death). This is where the film asks us to take our first two big leaps of faith: why the hell was Mary buried without a proper autopsy -- or an embalming for that matter? And it's pretty lucky Peter just happened to be close enough to hear her screams from inside her coffin. Yup. Pretty damn lucky. However, the suspense the scene builds, especially as Peter smashes into the coffin with a pick axe, only inches from Mary's face, pretty much makes up for these questions. I mean, damn, next time just pry the fucking lid off, Pete! This, by the way, is the formula Fulci applies throughout the rest of the film: a lot of strange things that don't make sense, quickly buried by creepy atmosphere and shocking scenes of gore.

As a result of the gate being opened, the dead are coming back to claim the souls of the living and swell their ranks. Here's the next problem: are they really zombies? Not really in any traditional sense, and that's including "real life" zombies and the various well-established movie types. Sure, "yeah, they're dead. They're all messed up". They kind of walk slow (when they do walk), but for the most part they are more or less some sort of demon, with super strength and teleportation powers. One moment they are in front of you, the next they have teleported behind you and are killing you by tearing your brain out of the back of your skull (their favourite finishing move, apparently). But hey, everyone calls them zombies pretty much, and I'm sure I saw some of them chow down on some stupid humans, so I'll not argue this one.

These demonic zombies are a big problem for the people of Dunwich. Appearing, killing, vanishing, appearing again to have staring contests with future victims. The priest has also come back and is apparently leading the ghouls. He appears to some people around town, using the demonic powers he has to kill them and turn them into zombies (via Jedi mind tricks that make you puke your guts out in the literal sense, and also by stuffing muddy worms down your throat!). The townspeople are scared and don't know what to think. Some decide to hold up in the local bar (despite the fact that an obvious crack from hell has formed in the wall!). Some suspect the town perv/freak, who likes blow-up dolls, is behind the killings. But the freak has problems of his own: he's seen the dead priest, and he's understandably freaked out. When one man catches said town freak hiding in fear in the man's garage, he attacks and kills him on his drilling lathe, thinking he was going after his daughter. Desperate times call for overreactions, I guess.

One of Mary's psychic friends informs her of all this gates of hell stuff, and that the key to ending the whole shebang is to get to the priest's grave before All Saints Day. Mary and Peter make the trek to Dunwich. It's not long before Mary and Peter are joined by Dunwich's resident psychiatrist Gerry (Carlo De Mejo) and one of his patients, Sandra (Janet Agren). Gerry's girlfriend was one of the victims and he's looking for answers. Sandra is there because... well, I have no clue. She's a bit unbalanced, so I suppose it makes sense to her at least. The only solution is to go down into the priest's grave -- which happens to be a large, hellish, underground chamber full of zombies -- and somehow stop him. The "how" is never really spelled out to the viewer. I guess we're supposed to assume they are going to kick ass or something along those lines. I assume this is where the film began to run out of money.

City of the Living Dead was sadly hurt by budget problems. The film was apparently never really finished. Fulci ran out of money and had to come up with something quickly. So what we got was this weird attempt at a horrific twist ending. Following a disappointing end to the evil priest, a local child that our heroes had befriended, after his parents and sister had fallen victim to the ghouls, comes running towards our two remaining heroes -- perhaps for a hug -- only for them to react with fright. Is Fulci implying that the boy is a demon? Or maybe our two demon killers realized they would be stuck raising this brat as foster parents? Who knows. But it's not the good kind of twist that leaves one guessing possible horrors to come. It's just a head-scratching let down that sort of soils a highly flawed but harmless Fulci gore fest. Is it a crime to end on a happy note? 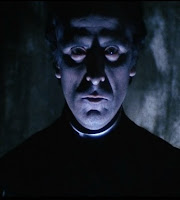 As much as there is to groan about, as I mentioned before, Fulci's strengths help keep things going. The atmosphere he builds is effective, considering what he had to work with. The gore scenes are impressive. The drill to the head; the worms down the throat; the actual sheep guts spit up by one actress in her death scene: these all help with the bitter pill that is one hell of a mess of a plot. Even the glued maggots to the face scene has its charms. I really, really dug the evil demon version of the priest. His character is actually one of the highlights of the film and adds to the creep factor quite nicely. Also of note is the score, which is essentially a decent rip off of Goblin's Dawn of the Dead stuff. As the film goes on, the lack of money sadly hurts much of the later effects. Check out those horrible zombie dummies that get set on fire after the priest dies. Yikes!

Repeated viewings of this film have led me to become more forgiving. I don't know if I'd go so far as to say it's so bad that it's good (although it has its moments) but it's not nearly as horrible as my original review made it out to be. Still, it is a mess. It's very much a lesser Fulci film, not worth going out of your way to seek out. Rent unless you're a zombie and or Fulci nut, and buy only if you can't get it any other way. There's new Blu-ray and DVD versions coming out on May 25th from Blue Underground, but you can still probably find their old 2007 DVD version for a dirt cheap price, if you're not interested in new extras and remastering.
Posted by Lee Russell at 9:56 AM

You wait years for a decent zombie flick then Survival of the Dead is released. Never mind. So is [Rec]2.

I saw this Fulci flick recently. I saw a bit of it recently. I either fell asleep or turned it off. It was that incoherent. I do remember the grave digging scene. That was good. Shame about the rest.

The film does ask a lot from the viewer, for sure. I think Fulci die-hards would get the most value out of repeated viewings. I picked up a bit more of the atmosphere he was going for on my second viewing of the film and enjoyed the gore scenes again, but the plot didn't make any more sense to me. Oh well.

I always have trouble deciding if I prefer this or THE BEYOND, Fulci rocks the zombie boat hardcore man!

Carl: I think I'd take The Beyond, Zombie/Zombi 2, or The House by the Cemetery over this film. There's some unforgettable scenes in City... for sure, but overall the film doesn't work for me, and I wouldn't point anybody unfamiliar with his work to this film first. Having initially watched this film before seeing his other work, I used to think Fulci was a bit of a hack.

Fantastic review! It's always nice to see criticism that is thoughtful rather than snarky (which, for this kind of film, really is the easy way out). For my money, I'd rather see a nonsensical Fulci film like this (or The Beyond, which is absolutely crazyland) than something that's comprehensible but dull like Murder Rock. Agreed that City is probably the worst intro to Fulci, though!

CWL -- Thanks for the kind words. Yeah, I try not to be lazy in my reviews and just trash something that's somewhat of an easy target. For me a film has to really be boring or so bad that it's insulting for me to really just crap all over it.