Writer Sam Dalmas (Tony Musante) is an American living in Rome with his girlfriend Giulia (Suzy Kendall). While taking a late night stroll past an art galley, he observes the final moments of what appears to be an attempted murder upon a young woman by a black-gloved man dressed in a raincoat. Being the only witness, the police at first stop him from leaving Rome (as he was planning on soon doing), as they believe the assailant may very well be the same person who has been responsible for a series of gruesome murders of young women in the city. Dalmas soon becomes obsessed with tracking down the murderer himself, and finds that his life and the life of Giulia are soon put into danger as the killer starts to stalk them. But Dalmas knows something isn't right about what he saw that night, and the need to know the truth drives his obsession to the point where it may be the end of him.

The Bird with the Crystal Plumage is a rather impressive and stylistic suspense thriller, and Dario Argento's directing debut. It's essentially an uncredited adaptation of Fredric Brown's novel The Screaming Mimi, previously adapted by Gerd Oswald as Screaming Mimi (1958). The framework of the film borrows a lot from Mario Bava, Sergio Leone, and Alfred Hitchcock in how it's shot and in some of the over-all themes. Most obvious are the Hitchcock themes here: the ordinary person in extraordinary circumstances; the use of suspense rather than jump scares; and -- with the number of shots that present the POV of the killer -- a thread of voyeurism that sucks the viewer into the film.

The major focus of the film seems to be Argento trying to mislead the viewer with red herrings and twists that don't actually betray the logic of the overall mystery, and he pulls it off like an old pro. On top of that he shocks with both graphic and implied bloody violence, dished out by a deeply disturbed killer upon unsuspecting women, always with sharp blades. He also peppers the film with weird characters, including a stuttering pimp; an ugly hit man who sports a bright yellow jacket (cult favourite character actor Reggie Nalder!); and a crazed artist whose painting may hold an important clue about the murderer. Argento misleads as well by subtlety informing the viewer's expectations with false clues derived from what the characters say. You expect the killer to be someone or something because the characters expect it. In the end you are as surprised as they are.

It's not only in the plot of the film itself that Argento manages to lead the viewer along liked the Pied Piper, but he did it with the impact of the film as well. Although not the first giallo film (Bava was doing them first), Bird is often credited (and rightly so) as having redefined what the genre could include, setting a new blueprint and, at least for the majority of the English-speaking audiences, actually becoming what the definition was. The film had not only a profound effect on the audience but on the film-makers to come after Argento, who often aped him in their own gialli. In this sense, Argento is much like Leone, whose westerns shaped what we all came to know as the Spaghetti Western, despite the genre having existed before Leone came on to the scene with his Dollars trilogy.

Although this was Argento's first film, he was essentially born into film making -- his background in film journalism, screen writing, and what he learned about photography from his mother (whom was a photographer of movie stars) obviously informed his style, or rather what his style would come to be known as. Although he wears his influences on his sleeve here, which is something a lot of first-time film makers are known to do, especially in the horror genre, this wasn't quite as common back then. Today it's a cute gimmick or in-joke, but to Argento's film it's actually important to the plot and the visuals. I've often thought that not only are some of the best moments of this film built on the skeleton of his influences, the one real low point shows up here as well with a scene at the end that was obviously taken directly from Psycho. It's a brief scene spelling-out in detail the reasons for why the killer did what they did. Like Psycho, it feels tacked-on and lazy. One misstep in an otherwise fantastic debut.

The actors do a fine job despite their roles being slightly under-written. Tony Musante, whom had real-life tension with Argento on the film, plays a handsome and somewhat unlikeable hero here. Despite his flaws, the character of Sam Dalmas needs to know the truth and in the end he does try to save those around him from the killer's wrath, after putting them directly in danger due to his obsession. Suzy Kendall has little to do, but manages to still stand-out, not only with her looks, but in one impressive scene where the killer tries to break into her and Sam's apartment. Enrico Maria Salerno's Inspector Morosini is pretty much a classic no-nonsense professional with a good heart. I mention that all these roles are underwritten, but it's not a critique. In fact, it was obviously intentional. It's in Argento's close-ups of their faces and eyes that we get a peek at the internal psychology of each character, and the actors all pull this off quite well. 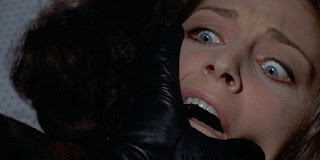 Last but not least is the great Ennio Morricone's creepy score. It's a mixture of striking atonal jazz and creepy child-like sequences, that seem to respectively hold up the sudden moments of violence and dread as well as the hidden past traumas that have welled-up to create the horrors in the present day of the film. Much like Argento's genre-defying structure and visuals, the methods Morricone used here were experimental for him, and he ended up using them again and again for about twenty more films.

As for the DVDs themselves, the first disc in this set provides a great print of the film, showing off both vibrant colours and Argento's rather nice use of minimal lighting, especially at night and in a scene in a totally dark room, where the only thing we see is Dalmas' silhouette in a door frame. The audio features an extensive amount of English and Italian options, and a commentary track from Argento buffs Alan Jones and Kim Newman. This track is more than worth the price of the set, as they discuss both the things they see on-screen as well as what was happening behind the scenes. They go into extensive detail about Argento's influences and where they show up in the film, and how they would further develop later in his career. Great film geek stuff. The collections of interviews on the second disc are somewhat of a let down, as most of them are too short to give you much information, and not really any new information at that. However, the bit at the end of Eva Renzi's, featuring an aside about what a psychopath Klaus Kinski was, is pretty amusing.

If you want to see one of the best giallo films, and really the film that made the genre what we know it to be today, here's the place to look. Argento indeed matured in future films, but this is rather bold, stylish and expertly made debut, and I find repeat viewings don't do anything to lessen its impact for me. 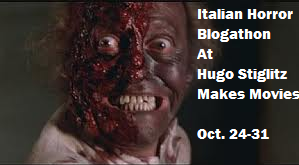 This post was written in part for the 2013 edition of The Italian Horror Blogathon, run by the fantastic film blog Hugo Stiglitz Makes Movies. Follow the link to see the other entries that pop up between now and the 31st! Hell, get off your ass and write your own!

Email ThisBlogThis!Share to TwitterShare to FacebookShare to Pinterest
Labels: DVD Spotlight, Italian Horror Blogathon 2013, The Bird with the Crystal Plumage