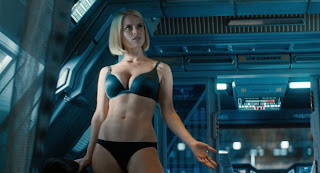 For some Trekkies this is where "no one has gone before".

After the events of The Avengers Tony Stark is a mental wreck. The personal growth and relationships he's built over the past two films are being threatened by the trauma he suffered. He's been isolating himself from people and getting lost in his work, designing and building numerous variations on his Iron Man suit. Meanwhile a mysterious Bin Laden-like terrorist called The Mandarin (played fantastically by Ben Kingsley) has been targeting American targets around the world with great success and making threats against the President. Stark recklessly lays down a direct challenge to the Mandarin to face him, which is quickly answered. Stark/Iron Man is defeated and presumed dead, but he's actually gone into hiding to regroup and regain his nerve and his life. Get past the explosions and it's actually a bit deeper than it had any right to be. At any rate, I love that all the fan boys got butt-hurt over what they did with the Mandarin. I thought it was a great twist. I mean, come on, I'm not a politically correct milksop, but Fu-Manchu is a bit played out, yes? Although I think they could have added a twist upon a twist in this case. Think about this: what if he really was the Mandarin all along, and the drug addicted actor The Mandarin is revealed to be is just another layer of his deception, setting himself up as the villain in a future Iron Man or Avengers film. Well, a geek can dream, I guess. Also, the subplot about the extremis stuff fell flat for me. I mean, super soldiers/living dirty bombs are fine, but the flame-based powers just seemed like an excuse to add even more special effects. I don't know, I don't read the comics, so perhaps it make more sense on paper. Still, having Shane Black at the helm and making this story more about Stark the man and his struggle with his alter ego was the right way to go I think. Far better than when Spiderman went all emo a few years back. Worthy rental.

Some horror fans may be familiar with the very cool teaser trailers that popped up in the mid-to-late 2000s for Worst Case Scenario, which featured inventive-looking Nazi zombies walking out of the water on to a Norwegian beach, somewhat evocative of the 1977 Nazi zombie film Shock Waves. That film never came to be, but director Richard Raaphorst finally managed to use his zombies in something, and for that I'm thankful. In this film we follow a squad of Russian soldiers making their way into Eastern Germany in 1945. One of them has a camera (and thus, yes, this is a found footage film), filming this march to victory. The squad gets a distress call from another Russian squad in a nearby town. When they go there to investigate they encounter former German soldiers converted into strange creatures, half-man and half machine, and not at all friendly. Zombies and found footage are both played out beyond words, but thankfully this film manages to make both work. The film's budget is low, but used effectively in a Blair Witch sort of way. The camera POV is ever-present, and thus the plot comes out a bit more organically, the characters learning what we learn as we go on. No after-the-fact exposition is present or needed. The film's cyborg/zombie creatures, that also have a bit of a steam punk feel to them, are creatively designed, and they are constantly popping up, sneak-attacking our heroes. I use the term heroes very loosely by the way, as they are all pretty much unlikable thugs. The film is not without flaws however. The film slows down quite a bit once our camera man comes face-to-face with the mad genius behind these creatures (Karel Roden), who is hinted at being the grandson of the original Frankenstein. This final act drags a bit too much and the finale could have been much more bat shit crazy -- a really missed opportunity there -- but overall I'm still happy with what they pulled off here. It's fun and it doesn't overstay its welcome. Best viewed with some alcohol and friends. Renty, renty.

Trekkie die-hards will hate this as much, if not more, than the first film in this reboot series. It's pretty much a big, dumb action film, featuring sexy young starfleet officers looking good in tight clothes. I mean, Alice Eve is pretty much in the film to look good in a brief scene where she shows off her space undies. And nice undies aside, I kinda liked it for what else it was. As much as I didn't want to see them try their own take on Khan, they managed to put a new spin on the original storyline of Space Seed and The Wrath of Khan and make it pretty interesting. They also sort of managed to remake The Wrath of Khan in some scenes without seeming too cynical or cute. The actors do a great job again taking over the classic roles; especially Kirk, Spock, Bones, and Simon Pegg's Scotty. Benedict Cumberbatch, from the BBC television show Sherlock, is really fun as Khan. He doesn't attempt to ape Ricardo Montalbán's performance, which is a smart move. I enjoyed the inside references to the original series. I enjoyed the look of the space scenes, especially near planets, that looked like matte paintings. Beautiful. This isn't great or even good Trek, but it's mindless, slick fun. So, worth a rental.
Posted by Lee Russell at 8:15 PM

I am butthurt. The Mandarin was completely assfucked in this movie. The only way to redeem would be real Mandarin in the next, fucking shit totally ups.

I can take it or leave it as far as the Mandarin goes. I'd like to see Justin Hammer back however. Perhaps siding with Ultron in the Avengers sequel...